As servers negotiate TLS connection, few things need to happen. Among them, a master key needs to be  negotiated to secure the connection and the client needs to be able to verify that the server it connected to is the one it intended to connect to. This happens by virtue of key exchange, either RSA, finite field Diffie Hellman (DH) or Elliptic Curve Diffie Hellman (ECDH). The server itself can be identified using either RSA or Elliptic Curve Digital Signature Algorithm (ECDSA) based certificates. All of them have their strong sides and weak sides, so let’s quickly go through them.

This way of deriving the key securing the connection is the simplest of the mentioned. It is supported by virtually all the clients and all the servers out there. Its strong point is relative high performance at small key sizes. Unfortunately, it doesn’t provide Forward Secrecy (PFS), which means that in case of private key leak all previous communication will be possible to decrypt.

Side note: while the acronym PFS stands for “Perfect Forward Secrecy”, the term “Perfect” comes from cryptography where it has a slightly different meaning than in vernacular. To limit confusion I’ll be calling it just “Forward Secrecy”.

Forward Secrecy is the prime feature of the ephemeral version of Diffie–Hellman. Its main drawback is high computational cost. Additionally, not all clients support it with RSA authentication, all versions of Internet Explorer being the prime example. While there exist a non ephemeral version of DH, it doesn’t support PFS nor has widespread support so we will ignore it for now.

ECDH is the new kid on the block, this means that it is supported only by relatively new clients. The strong points are low computational cost and much smaller key sizes for the same security levels. Similarly to DH, there exist ephemeral and non ephemeral version of it, the latter has limited support in clients and does not provide PFS.

It’s the venerable and widely supported cryptosystem. Supported by virtually anything that has support for TLS or SSL. With us since the SSLv2. Unfortunately it’s starting to show its age, performance at key sizes providing 128 bit level of security is rather low and certificates are starting to get rather large (over 1KiB in size for 3072 bit RSA).

Elliptic Curve Digital Signature Algorithm, just like ECDH is a new cryptosystem. This causes it to suffer from same problem: no support for it in old clients. It does use much smaller key sizes for the same security margins and is less computationally intensive than RSA.

While the key exchanges and authentication mechanisms are relatively separate, in TLS the ciphersuites limit the available options. In fact, for the ECDSA ciphers, only ECDH key exchange is available. Or to spell it out, I could test only following configurations: 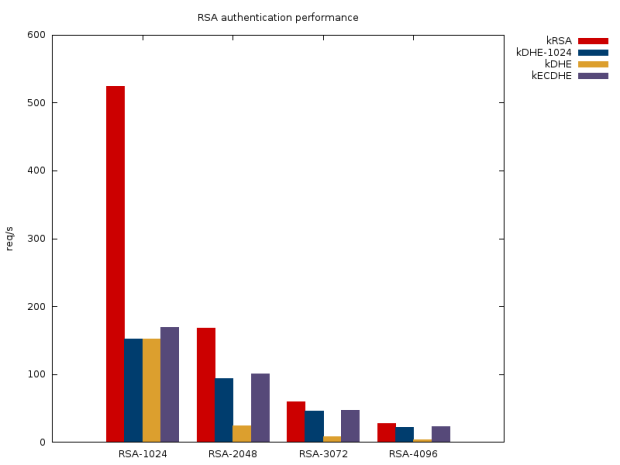 We can clearly see that that using non PFS enabled key exchanges brings huge performance improvements for legacy key sizes. RSA key exchange at 1024 bit is actually over 3.4 times faster than DHE key exchange. At this small sizes, using 256 bit ECDHE also doesn’t show much performance advantage over DHE, it is just 11% faster (note though that it is also comparable to 3072 bit DHE in security level).

Going to 2048 bit RSA, the performance advantage of not using PFS ciphers quickly shrinks. Here using RSA key exchange over 1024 bit DHE gives about 78% more performance. This configuration, while common because of lack of support of higher DHE parameter sizes in older Apache servers, doesn’t really provide higher security against targeted attack than use of 1024 bit RSA. Use of ECDHE is also looking much more interesting, at only 40% penalty compared to RSA key exchange. Using DHE key exchange with matching parameter sizes give performance that is nearly 7 times slower than pure RSA.

So, how does it compare to ECDSA key exchange? 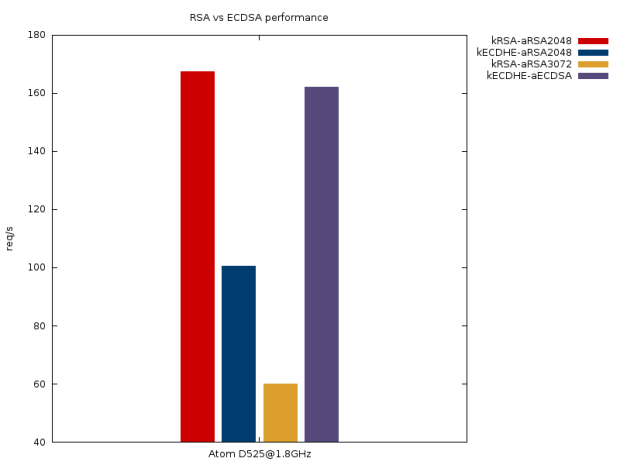 If we use the currently acceptable 2048 bit RSA key exchange, it will turn out that the RSA is about 3% faster than the combination of ECDHE key exchange and ECDSA authentication (both using 256 bit curve). But if the required security level reaches 128 bits or PFS is required ECDSA with ECDHE is much faster.

In other words, if you’re running Apache web servers you should consider using two certificates for the same site. This will allow to negotiate RSA cipher suites with the legacy clients while it will provide lessened load on the server with modern clients.

The configuration is also relatively simple, you just need to specify certificate and key file twice:

For nginx, the configuration is very similar, you will need to run the relatively new 1.11.0 version, or later (see CHANGES) though.

Similarly, you need to make sure that the cipher string used doesn’t disable ECDSA authenticated ciphersuites.